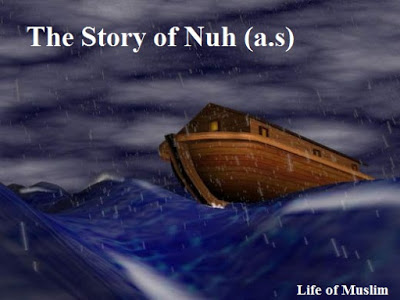 Ten generations after Aadam (a.s) passed away; idol worship grew, to stop the spread of evil Shirk: ALLAH sent the Prophet Nuh (a.s). Ibless had misled people to worship pious dead men like “Wadd”, they bowed to graves, made statues, and took them as their gods.

Living for nine hundred and fifty years; Nuh (a.s) preached in many ways, but with fingers in ears the pagans (Kaafir) jeered, and told him to go away. The cheifs of pagans said Nuh (a.s) was mad, followed only by the weak and poor, but when they threatened to stone him, Nuh (a.s) could take no more.

“Don’t leave on earth any disbelievers!” to ALLAH prayed Prophet Nuh (a.s), they would misguide and raise more, so it was better to start anew. Nuh (a.s) was told to build a big boat: an Ark (boat) made of nails and wood, ALLAH guided Nuh (a.s) as he built it, and he made it strong and good.

Joking tha Ark was far from the sea; the pagans (Kaafir) giggled in laughter, Nuh (a.s) said, their fun would soon end and turn into sadness after.. A disbeliever would bring his son so he could poke fun at Nuh (a.s), recalling as a kid, his own father used to make fun of Nuh (a.s) too.

The pagans dared Nuh (a.s) “Bring ALLAH’s doom!” joking about the flood, stormy waves would soon drown them, washing away their evil blood. Nuh (a.s) began to fill the Ark (boat) with animals; in pairs of male and female, with only about eighty believers aboard, the Ark (boat) got ready to sail

Nuh (a.s) would soon board the Ark, while saying “Bismillah” was best, with ALLAH’s protection the boat would float, move and finally rest. Water gushed from cracks in the ground, ovens and places of fire, the skies overflowed with rain and the waves got higher and higher.

Nuh (a.s) asked his son Kenan to leave evil disbelief and climb aboard, saying nothing could save except ALLAH’s Mercy, as the rain poured. Nuh’s son didn’t listen and climbed a high mountain; feeling all secure but huge waves crashed into Kenan, sweeping him to his death for sure.

Nuh (a.s) asked ALLAH to forgive his son, saying he was a famil member. ALLAH said not to treat him as one, as ALLAH he chose not to remeber. Even though Nuh (a.s) was a prophet but his wife and son didn’t believe. Nuh (a.s) felt sad, but was told for disbeliever he shouldn’t grieve.

They floated in the Ark for many months; in a world, wet and moody, until ALLAH told the earth to dry up its waters; the Ark then landed on Mount Judi. ALLAH blessed “Peace” upon the Ark’s crew; faith had kept them alive. They fasted and prayed to ALLAH, thankful they had survived.

Nuh (a.s) advised his three sons; Ham, Yapheth and Shem before he died, saying worship ALLAH without shirk, and warned about Dajjal and pride. The Believers and animals spread new life across the earth once again, now when we see ships, we think of Nuh’s (a.s) Ark (boat) carrying life in the rain.