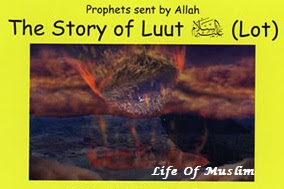 ALLAH sent Prophet Ibrahim’s (a.s) nephew Luut (a.s) to guide Palestine, to Sodom and its seven cities, where disbelievers did evil crimes. The cities were near a trading route used by everybody but thugs used to mug there, stealing in daylight robbery.

The Sodomities used to cheat, steal and lie without any shame, doing nasty things ever done before, more evil the became. Luut (a.s) tried to guide them to be good and follow ALLAH’s way but they carried on sinning quite gaily (gay) and chose to disobey.

ALLAH joined Aadam (a.s) and Hawa (a.s), so couples could make babies in life but Sodomities mocked ALLAH’s natural way and hated to take a wife. Luut (a.s) warned them to stop their Shirk and leave aal that was unclean, forcing Luut (a.s) to go; they said the Believers were too pious and clean !

The Sodomities mocked ALLAH until Luut (a.s) could guide no more, Luut (a.s) wanted help to stop the rot, shocked at what he saw. Being the only good man left in the cities, Luut (a.s) began to pray, saying, “O ALLAH! Save me and my family from the evil ways!”

One da three strangers came to Luut (a.s), he warnes them not to stay, he said Sodomities were evil, hoping the visitors would go away. Trying to protect them, Luut (a.s) took his guests home; worried for real, he didn’t realize they were Angels: Jibreel, Mikaeel and Israfeel.

The guests then told Luut (a.s) that they were Angels telling him not to fear, they came in the shape of men, sent by ALLAH to stop the evil rot. Angel Jibreel made the Sodomities blind, in terror they ran away. The Angels told Luut (a.s) to leave; Sodom’s destruction was next day.

Before dawn Luut’s (a.s) family escaped, but his evil wife lagged behind, the Angels warned “Don’t turn back”, not even for noises of any kind. By morning, Angels had lifted and smashed the cities upside down, the Sodomities screamed in fear as fire burnt up their evil towns.

ALLAH sent a rain of fiery brimstones, falling in scorching layers, each stone marked a Sodomite for death, all caught unawares. Luut’s (a.s) wife was a disbeliever, she didn’t listen and turned around, saying, “Oh my people!” as a brimstone pelted her into the ground.

Sodom and its cities were punished, seen with no real worth, now lying under the salty Dead Sea (lifeless lake, so full of salt that people can float in it between Jordan and Israel), the lowest place on earth. Luut (a.s) traveled to see Ibrahim (a.s), being surprised as he already knew, Angels had visited him before Luut (a.s) ; stopping to give him the news.