72 Signs Of Qayamat – Qayamat Ki Nishaniyan – End Of The World

According to Sahih Muslim, below are 72 signs of Qayamat (End Of The World)

3. Lying will become an Art.

4. There will be murders on the slightest of disagreements

6. There will be very tall buildings

7 People will sell religion for the world.

9 Justice will become a rarity

10 Lies will be considered truth

11. Clothes will be of silk

15. The usurper of Ama’naat will be considered honest and honorable.

16. The keeper of Ama’naat will be called an usurper of things given to him for safekeeping

17. Liars will be thought of as honest

18. Honest people will be thought of as liars

19. False accusations will become the norm.

21. Instead of wishing for children, people will pray that they not have children

22. People from bad backgrounds and with bad upbringing will live a life of luxury (material, not peaceful).

23. Good people, when they try to practice, will be cut off from the world

26. Ulema and Qaris will commit adultery.

28. But their hearts will smell and will be dead.

31. Demand for silver will increase.

34. Ayaats from the Quran will be decorated and calligraphy will become.

35. Mosques will be decorated.

36. And will have tall Minars.

38. Alcoholic drinks will be consumed.

39. Punishments ordered by the Shariah will be revoked and will not longer be implemented.

40. Women will order their mother around.

41. People who are with naked feet, naked bodies and against religion will become kings.

42. Women will trade along with men.

45. People will swear by things other than Allah and the Quran.

46. Even Muslims will be prepared to give false testimony, without being incited to it.

47. Only people one knows will be greeted with the salaam.

48. The knowledge of the Shariah will be used to earn worldly things.

49. Acts, which earn the Akhirah, will be used to earn the world.

50. Assets belonging to the nation will be considered and treated as personal treasures by the rulers.

51. Ama’naat will be considered ones personal asset.

52. Zakaat will be considered as a penalty.

53. The lowest and the worst man in the nation will become its leader.

54. People will not obey their fathers.

55. And will mistreat their mothers.

56. And will not hold back from harming their friends.

57. And will obey their wives.

58. And the voices of the men who commit adultery will be raised in mosques.

59. Women who sing will be treated with great deference.

60. Instruments of music will be kept with great care.

61. Alcohol will be drunk on the highways.

62. People will be proud of their acts of persecution.

63. Justice will be sold in the courts.

64. The number of men in the police force will increase.

65. Instead of music, the Quran will be used to gain pleasure for its tune and style (qirat), not for what it preaches, its meaning or for rewards in the Akhirah.

67. The last of the Ummat will curse those before them (clearly seen today in people who call the Prophet’s companion’s names).

68. Either Allah will send a Red Storm upon you.

70. Or your faces will be changed.

71. Or a rain of rocks from the skies. Asteroids? Meteors.

72. Lies will become a habit of the rulers and the rich.

1. Alcohol will be called Sherbat and will be considered Halal.

2. Interest will be called Trade and will be considered Halal.

3. Brides will be called Gifts and will be considered Halal.

4. Women will be naked in spite of wearing dresses.

This Hadith has baffled the Ulema for a very long time until now:

The three kind of naked women are:

1. Those who wear see-through dresses.

2. Those who wear tight dresses.

3. Those whose dresses are so short and they expose the body.

Women will have hair, like the hump of a camel. (This hadith too, bad baffled the Ulema for quite a long time till they saw current hairstyles. I believe it came into fashion about 5 years ago). 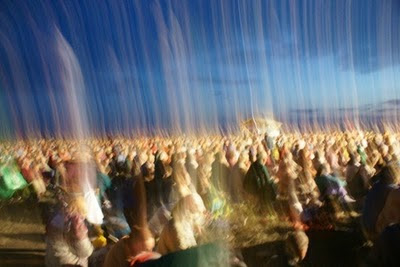