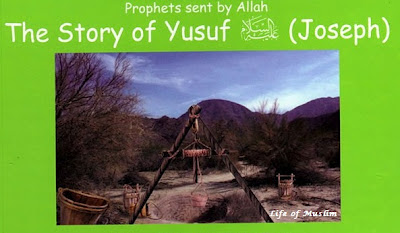 Yusuf (a.s) saw eleven stars, sun and moon bow to him in a dream, his father told him not to tell his half-brothers what he had seen. They jaelously said Yaqoob (a.s) loved Yusuf (a.s) (and Binyameen) too dearly, but Yusuf (a.s) would become a Prophet able to explain dreams clearly.

His half-brothers planned to kill Yusuf (a.s) or kick him out of Canaan, they plotted to throw him into a well; he’d be seized by a Carvaan. They asked if Yusuf (a.s) could go with them; being trusty shepherd lads, Yaqoob (a.s) warned of wolves, saying if they lost Yusuf (a.s); he’d be very sad.

They took Yusuf (a.s) shirt, chucked him in the well and walked away, soaking it in sheep blood, they kept their evil a secret that day. Later crying a wolf ate Yusuf (a.s), whilst they were away on a race, their father saw the red shirt, knowing they had lied in disgrace.

A Caravan of traders going to Egypt looked happily into the well, pulling Yusuf (a.s) as a slave, they took him to the market to sell. Aziz, a Cheif of Egypt, bought Yusuf (a.s) for a few coins going cheap, he told his wife, if Yusuf (a.s) worked well, he’d be like a son to keep.

Aziz’s naughty wife, wickedly chased handsome Yusuf (a.s) one day, Yusuf (a.s)asked ALLAH’s help, she ripped his shirt as he ran away. Aziz opened the door in shock, as his wife gave Yusuf (a.s) the blame, but seeing Yusuf’s (a.s) shirt torn at the back, he knew her lying game.

To stop the gossip, she called her friends, giving them fruit to slice, they cut their hands on seeing Yusuf (a.s), saying he looked Angel-nice. She threatened to throw Yusuf (a.s) in jail, asking him to do Haraam, Aziz sadly jailed him to stop gossip, and save Yusuf (a.s) from harm.

Two in jail knew Yusuf (a.s) explained dreams, asking, “Explain mine!” the Cook saw birds eat off his head, while the waiter made wine. Yusuf (a.s) first made them believe, then explained what they could be, “Cook you’ll die and Waiter you’ll serve, so tell the King about me”

The King had a dream of cows and corn; his magician’s couldn’t explain, Yusuf (a.s) told the Waiter, “Store food before seven years without rain”. The amazed King asked Yusuf (a.s) to be the Chief of Grain: to over see, he made the King get Aziz’s wife to confess, before he was set free.

Yusuf’s (a.s) brothers went to Egypt, not knowing he was cheif of grain, leaving their money he asked for Binyameen, so they’d return again. Yusuf (a.s) met Binyameen in joy and hid a gold cup in his sack (as a thief), his brothers begged to replace him, saying Yaqoob (a.s) was blind in grief.

Forgiving Yusuf (a.s) told them who he was, saying, “Give father my shirt”. Yaqoob’s (a.s) sight returned with its smell and forgave his sons for hurt. Yusuf’s (a.s) family bowed to him in the King’s palace, just like his dream, before Yaqoob (a.s) died he told his sons to obey ALLAH and follow his Deen.