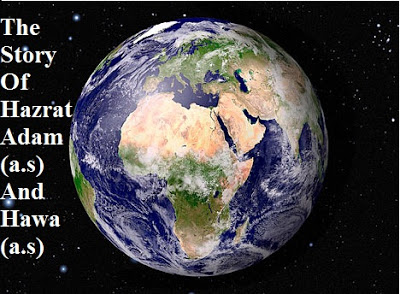 “ALLAH gathered many types of soilfron Earth’s different lands, then from its clay HE made Aadam (a.s). When ALLAH blew the spirit of life into him: Aadam (a.s) sneezed, ALLAH sent Mercy on him and blessed him as He pleased.

Aadam (a.s) said “As-salaam-alaykum”, to the angels as a greeting, they added “Warahmatullaahi”, just like two Muslims meeting. AL…LAH told the angels, the new Khalifa for Earth was mankind, they said, Man may harm and kill, but angels obeyed all the time.

ALLAH gave Aadam (a.s) knowledge to name all the things around him, the angels couldn’t; and praised ALLAH, finding the skill outstanding. ALLAH told the angels in Jannah, to Aadam (a.s) they had to bow, the angels obeyed, but Iblees refused and began an evil row.

Iblees wasn’t an angel of light, as angel never fall into sin, but chose evilinstead of good because really he was a Jinn. Thinking he was better than Aadam (a.s, Iblees became a proud liar,saying Aadam (a.s)was made of mud clay, while he was made of fire !

ALLAH cursed Iblees; the Shaytaan, and promised to send him to Hell. Iblees asked for life till the Last Dayto tempt others as well. Iblees became Mankind’s enemy, plotting evil until the Last Day, misguidingMan to Shirk and sin; away from ALLAH’s Straight way.

Aadam (a.s) felt lonely in Jannahand needed a partner to share his life, so ALLAH made a woman from Aadam’s rib and she became his wife. Aadam (a.s) and Hawa (a.s) lived in the garden of Eden, as happy as could be, but ALLAH warned them not to eat the fruit from one particular tree. Iblees urged them to eat the fruit; the fake advisor was lying, saying they’d turn into angels and live forever without dying. After they ate it, they hid behind leaves; feeling awful shame, upset at failing ALLAH’s test, now aware of Shaytaan’s evil game.

ALLAH told all three, that from Jannah they were now forbidden, but Aadam (a.s) and Hawa (a.s) made Tawbah and were kindly forgiven. ALLAH set the earth as a test, to sort out the bad from the good, mankind had to work hard in life, for shelter, clothing and food.

Aadam (a.s) and Hawa (a.s) had many twins who spread across the world, some did sins and disobeyed, but the good followed ALLAH’s world. Some were pious like Prophet She’th (One of the son of Aadam), who guided people to right, while some were evil like Kabeel (an evil son of Aadam), who killed his brother in a fight.

Humans have shrunk since Aadam (a.s) [as he was 60 Cubits (30 meters) tall], from clever Aadam (a.s) come all races of men, not from apes at all !!!
Before Aadam (a.s) died, he warned his family against Iblees’s plans, saying ALLAH would send Prophets to guide Earth’s different lands.