The Story Of Shuaib A.S (Jethro) 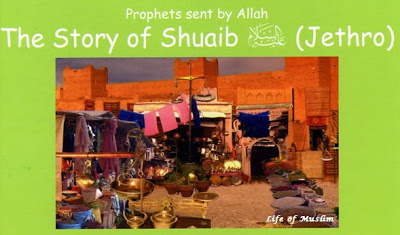 Shuaib (a.s) was sent to to guide Madyan’s “People of the Woods” who lived b a trade route near Dead Sea selling goods. He told them to fear ALLAH and stop selling goods with lies, to earn Halal money and to believe in ALLAH was more wise.

Shuaib (a.s) told them not to bow to idols of stones and trees, to stop Shirk, be honest and good, and try to please ALLAH. Shuaib (a.s) was the “Khatibul Anmbiya” (Excellent Preacher of the Prophets) and gave great speeches, but evil ones jokes; “We don’t understand what he teaches!”.

Madyan’s traders used cheating scales and gave short-change, greedy for riches, they joked
Shuaib’s (a.s) call was very strange. They said they would stone him if he didn’t belong to a good Clan, he told them to fear ALLAH more and stop doing evil in Land.

Shuaib (a.s) told Madyan not to hate the truth or reject his calls, if not, then like Luut’s (a.s) people, ALLAH would destroy them all. Soon they harmed Believers, at roadblocks stealing their goods, they beat them up and tried to make them return to falsehood.

The cheif said Shuaib (a.s) was bewitched; joking his Deen was funny, hating prayers and charity, they only wanted to make more money. He prayed for ALLAH’s help, as the proud pagans turned mean, Shuaib (a.s) said, he’d hate to lie about ALLAH and to leave His Deen.

Joking if he was true he could make pieces fall from sky, the called Believers losers; destruction would soon come by. Shuaib (a.s) asked ALLAH to help put an end to Madyan’s evil towns, soon a bad drought began, and sun sent fierce heat down.

Shuaib (a.s) told Madyan to make Tawbah to avoid ALLAH’s punishment, loving their father’s religion over Truth, they refused to repent. The Believers had to leave, as dark clouds come Madyan’s way, pagans rushed out in a joy, hoping clouds would give rain that day.

But as they stood in shade, fire blasted them down to the ground, the earth shook noisily, while their screams added to the sound. By morning, life in Madyan stopped; dead in homes they la flat, like Thamud’s disbelievers destroyed before them: just like that.

Madyan’s wealth didn’t save them from the hour of ALLAH’s doom, ending up as losers, their joy turned sour on their “Day of gloom”. Seeing the destruction, Shuaib (a.s) said he’d told Madyan to do right, he didn’t feel sorry for them, since against ALLAH’s way they’d fight.

Shuaib (a.s) met Musa (a.s) escaping Egypt, and gave food, shelter and a bed, Musa (a.s) worked as a shapherd for him and later his daughter he wed. Shuaib (a.s) called to Tawheed and piety, inviting to belief until he died, the last of the Arab Prophets until Muhammad (s.a.w) came later to guide.