The Story Of Saleh (AS) 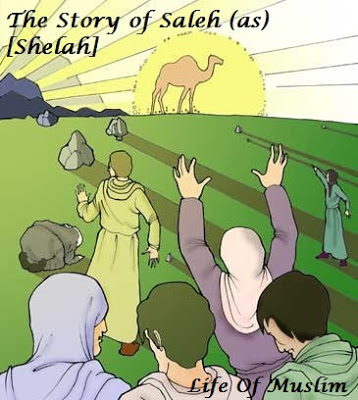 The Thanud tribe lived in Arabia doing Shirk just like the Aad, they also bowed to idols and over time their hearts grew hard. Like the Aad giants ruined earlier, they built massive homes, carving them into mountain sides by skillfully cutting stones.

ALLAH choses Saleh (a.s) from among them, calling to worship ALLAH Alone, the Thamud said Saleh (a.s) was under a spell; a liar to be left alone on his own. When things turned wrong they blamed Saleh (a.s) for bringing bad luck, saying he may have been cheif : if to the old pagan ways he had stuck.

The Thamud asked Saleh (a.s) for a miracle to prove that he was true, for a huge She-camel born from rock, with a baby in it’s belly too. They promised if the miracle worked that ALLAH they would obey, so ALLAH split the mountain creating the She-camel right away.

The huge miracle She-camel amazed theml later it’s baby was born, whilst the humble ones believed, the proud ones had to be warned. The She-camel shared their water, drinking it every other day, after she drank, they milked her a lot and happily walked away.

The She-camel wandered freely in the valleys as she grazed, Saleh (a.s) warned Thamud not to harm her but do as ALLAH says. The disbelievers soon hated the She-camel and the water ban, Thamud’s cheifs gathered them together, plotting an evil plan.

The shot arrows as Qidar stabbed her; her baby ran off in fear, she died as her crying baby fled to the mountains to disappear. The Thamud cheered their heroes, who set off to kill Saleh (a.s) dead, but ALLAH sent stones from the sky that crushed all nine instead.

Saleh (a.s) warned the others of three days to enjoy life and repent, he left the Thamud as they dared, “Bring on ALLAH’s punishment!” The fools refused ALLAH’s Mercy, laughing as Saleh (a.s) moved away but their faces turned from yellow to red to black each new day.

One morning, the earth shook and a noise blasted from the sky, the Thamud died screaming in pain, becoming like twigs: all dry. One called Abu Righal hid in ALLAH’s sacred area as an escape plot, but as soon as he left, a stone from the sky killed him on the spot.

The Thamud lost their gardens, vines, dates and houses of rock, their stone homes no protection, punished as ALLAH they mocked. Prophet Muhammad (saw) didn’t enter Thamud’s place but passed them by, warning the area of destruction is cursed; if you go in you should cry.