The Story Of Hazrat Ibrahim (A.S) 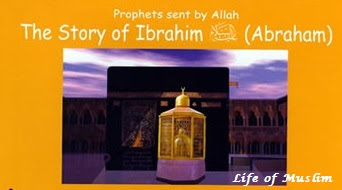 Ibrahim (a.s) grew up in a land full of idol worship called Babylon, where pagans bowed to false gods like men, the stars and sun. As a boy Ibrahim (a.s) saw his father, Azar, carving idols out of wood, bowing to useless statues, even trying to feed them as if he could!

He told his father to stop Shirk, as idols couldn’t see or hear, Azar told him not to disobey or he’d stone him to make him fear. Azar shouted,”Worship your father’s gods!” Ibrahim (a.s) didn’t sway, saying he would pray for his father, he said “Peace!” and went away.

Ibrahim (a.s) wanted Truth and didn’t worship tha stars, moon or sun. He wanted to know their Creator and worship the only True One. Once the pagans went to a festival, but Ibrahim (a.s) faked feeling sickly. He smashed all the idols but fixed an axe on one and felt very quickly.

The angry pagans roared, “Did you kill our gods?” wanting all the facts, clever
Ibrahim (a.s) said, “Why don’t you ask the big idol holding the axe?” They said,”Idols can’t speak!” He said, “Don’t bow to what you make!” “Idols can’t help or harm you, so Worship ALLAH for goodness sake!”

They cried,”Help the gods! Light a big fire and toss the evildoer in!” but Ibrahim (a.s) was unhurt as ALLAH made the fire cool and safe for him. The pagan losers plotted to kill him but lost against ALLAH’s Plan. Ibrahim (a.s) was given the title “Khalilullah” (Friend of ALLAH), a Muslim and very pious man.

Ibrahim (a.s) asked how ALLAH raised the dead; he was told to raise four birds, to kill and spread them afar; they flew back alive, raised by ALLAH’s Word. King Nimroud boasted he gave life and death, so Ibrahim (a.s) posed a test, “ALLAH raises the sun from the East, can you raise the sun from West?”

Ibrahim (a.s) traveled with his wife Sarah (a.s) [The first wife of Ibrahim (a.s). She gave birth in old-age to Ishaaq (a.s) from whom Jews and the Jewish Prophets came]
and his nephew Luut (a.s) to Palestine. Then took his Co-wife Hajrah (a.s) [Mother of Ismaeel] and her baby to Makkah after some time. Hajrah (a.s) ran in panic from Saffa to Marwa; thirst Ismaeel (a.s) wouldn’t hush. An Angel pointed out Zamzam and they drank as the well began to gush.

Ibrahim (a.s) often visited Hajrah (a.s) and his son in the dry area of Bakkah, he built the Ka’abah with Ismaeel (a.s); ALLAH’s House for Hajj in Makkah. ALLAH Blessed the area around the World’s first Masjid with peace, even Angel Jibreel brought a special stone to fit as a corner piece.

Ibrahim (a.s) told young Ismaeel (a.s) that he dreamt he had to be killed,
Ismaeel (a.s) said he’d be patient, so ALLAH’s orders could be fulfilled. With the blade on his son, ALLAH told him he had carried out his vision, looking; he saw a ram in Ismaeel’s (a.s) place, thrilled by ALLAH’s decision.

Angels visiting Luut (a.s) came to Ibrahim (a.s) with the news giving Sarah (a.s) laughter, being old, they would have baby Ishaac (a.s), and Yaqoob (a.s) as a grandchild after. Ibrahim (a.s) prayed for a pious family, from his Line did Muhammas (saw) come, muslims bless Ibrahim (a.s) and his family (in the five daily prayers it’s done).

9 thoughts on “The Story Of Hazrat Ibrahim (A.S)”