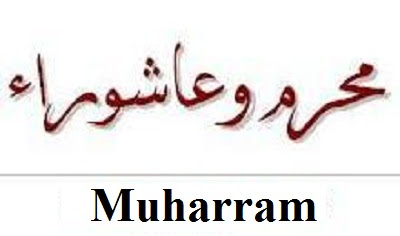 Muharram is the month with which the Muslims begin their lunar Hijrah Calendar. It is one of the four sanctified months about which the Holy Quran says, “The number of the months according to Allah is twelve months (mentioned) in the Book of Allah on the day in which He created heavens and the earth. Among these (twelve months) there are four sanctified”.

These four months, according to the authentic traditions are the months of Zulqadah, Zulhijjah, Muharram and Rajab. All the commentators of the Holy Quran are unanimous on this point, because the Holy Prophet صلى الله عليه و سلم in his sermon on the occasion of his last Hajj, has declared:

“One year consists of twelve months, of which four are sanctified months, three of them are in sequence; Zulqadah, Zulhijjah, Muharram, and the fourth is Rajab.”

In fact, every month, out of the twelve, is originally equal to the other, and there is no inherent sanctity, which may be attributed to one of them in comparison to other months. When Allah Almighty chooses a particular time for His special blessings, then it acquires sanctity out of His grace.

In the Shariah of our Holy Prophet صلى الله عليه و سلم the sanctity of these months was upheld and the Holy Quran referred to them as the “sanctified months”.

The month of Muharram has certain other characteristics peculiar to it, which are specified below.

Fasting during the month

The Holy Prophet has said:

“The best fasts after the fasts of Ramadan are those of the month of Muharram.”

The Hadith does not mean that the award promised for fasts of Muharram can be achieved only by fasting for the whole month. On the contrary, each fast during this month has merit. Therefore, one should avail of this opportunity as much as he can.

Although the month of Muharram is a sanctified month as a whole, yet, the 10th day of Muharram is the most sacred among all its days. The day is named Ashurah.

According to the Holy companion Ibn Abbas. The Holy Prophet صلى الله عليه و سلم , when migrated to Madinah, found that the Jews of Madinah used to fast on the 10th day of Muharram. They said that it was the day on which the Holy Prophet Musa (Moses) and his followers crossed the Red Sea miraculously and the Pharaoh was drowned in its water.

On hearing this from the Jews, the Holy Prophet صلى الله عليه و سلم said, “We are more closely related to Musa than you” and directed the Muslims to fast on the day of Ashurah. (Abu Dawood)

It is also reported in a number of authentic traditions that in the beginning, fasting on the day of Ashurah was obligatory for the Muslims.

It was later that the fasts of Ramadan were made obligatory and the fast on the day of ”Ashurah was made optional. Sayyidah Aishah has said:

“When the Holy Prophet صلى الله عليه و سلم came to Madinah, he fasted on the day of Ashurahh and directed the people to fast it. But when the fasts of Ramadan were made obligatory, the obligation of fasting was confined to Ramadan and the obligatory nature of the fast of Ashurah was abandoned. One can fast on this day, if he so wills, or can avoid fasting, if he so wills.”

However, the Holy Prophet صلى الله عليه و سلم used to fast on the day of Ashurah even after the fasting in Ramadan was made obligatory.

In short, it is established through a number of authentic hadith that fasting on the day of Ashurah is Sunnah of the Holy Prophet صلى الله عليه و سلم and makes one entitled to a great reward.

According to another Hadith, it is more advisable that the fast of Ashurah should either be prefixed or suffixed by another fast. It means that one should fast two days: the 9th an 10th of Muharram or the 10th and 11th of it. The reason of this additional fast as mentioned by the Holy Prophet صلى الله عليه و سلم is that the Jews used to fast on the day of Ashurah alone, and the Holy Prophet صلى الله عليه و سلم wanted to distinguish the Islamic-way of fasting from that of Jews. Therefore, he advised the Muslims to add another fast to that of Ashurah.

Some traditions signify another feature of the day of Ashurah.

According to these traditions one should be more generous to his family by providing more food to them on this day as compared to other days. These traditions are not very authentic according to the science of Hadith. Yet, some Scholars like Baihaqi and Ibn Hibban have accepted them as reliable.

Ads by Google:
Advertisements not controlled by IslamiCity

What is mentioned above is all that is supported through authentic sources about Ashurah.

However, there are some legends and misconceptions with regard to Ashurah that have managed to find their way into the minds of the ignorant, but have no support of authentic Islamic sources, some very common of them are these:

This is the day in which Adam was created.

This is the day in which Ibrahim was born.

This is the day in which Allah accepted the repentance of Sayyidina Ibrahim.

This is the day on which the Qiyamah (dooms-day) will take place.

Whoever takes bath in the day of Ashurah will never get ill.

All these and other similar whims and fancies are totally baseless and the traditions referred to in this respect are not worthy of any credit.

Some people take it as Sunnah to prepare a particular type of meal in the day of Ashurah. This practice, too, has no basis in the authentic Islamic sources.

On the contrary, it is one of the merits of Sayyidna Husain that his martyrdom took place on the day of Ashurah.

Another misconception about the month of Muharram is that it is an evil or unlucky month, for Sayyidna Husain was killed in it. It is for this misconception that people avoid holding marriage ceremonies in the month of Muharram. This is again a baseless concept which is contrary to the express teachings of the Holy Quran and the Sunnah. Such superstitions have been totally negated by the Holy Prophet صلى الله عليه و سلم . If the death of an eminent person in a particular day renders that day unlucky for all times to come, one can hardly find a day, free from this bad luck, out of 365 days of the whole year, because each and every day has a history of the demise of some eminent person. The Holy Quran and the Sunnah of the Holy Prophet صلى الله عليه و سلم have made us free from such superstitious beliefs, and they should deserve no attention.

Another wrong practice related to this month is to hold the lamentation and mourning ceremonies in the memory of martyrdom of Sayyidna Husain.

As mentioned earlier, the event of Karbala is one of the most tragic events of our history, but the Holy Prophet صلى الله عليه و سلم has forbidden us from holding the mourning ceremonies on the death of any person. The people of Jahiliyyah (Ignorance) used to mourn over their deceased relatives or friends through loud lamentations, by tearing their clothes and by beating their cheeks and chests. The Holy Prophet صلى الله عليه و سلم stopped the Muslims from doing all this and directed them to observe patience by saying “Inna lillaahi wa innaa ilayhi raaji oon”. A number of authentic hadith are available on the subject.

To quote only one of them:

“He is not from our group who slaps his cheeks, tears his clothes and cries in the manner of the people of jahiliyyah.”

All the authentic jurists are unanimous on the point that the mourning of this type is absolutely impermissible. Even Sayyidna Husain shortly before his demise, had advised his beloved sister Sayyidah Zainab not to mourn over his death in this manner. He said:

“My dear sister, I swear upon you that you, in case I die, shall not tear your clothes, nor scratch your face, nor curse anyone for me or pray for your death”.

It is evident from this advice of Sayyidna Husain that this type of mourning is condemned even by the blessed person for the memory of whom these mourning ceremonies are held. Every Muslim should avoid this practice and abide by the teachings of the Holy Prophet صلى الله عليه و سلم and his beloved grand child Sayyidina Husain.

It is the first month of the Islamic Calendar.

The meaning of the word:- The word “Muharram” means “Forbidden.” Even before Islam, this month was always known as a scared month in which all unlawful acts were forbidden, prominently the shedding of blood.

A blessing of Muharram:- There are many bounties of this month, especially the tenth of Muharram.

Two of the many virtues of the 10th of Muharram:-

On this day he who spends more lavishly for the sake of his family members, Allah Taala will bestow blessing upon the sustenance of the following year.

Abu Qataada has related that the Prophet صلى الله عليه و سلم has reported to have said, It is my thought that by fasting on the 10th of Muharram Allah Taala will pardon the sins of the past year. (Tirmizi)

Hadhrat Hussain was martyred in this month.

Shaykhain Tirmizi & Haakim has narrated from Anas that the following verse:

“Allah may forgive thee of thy sins that which is past and that which is to come.” (Al-Fath) was revealed on the 10th of Muharram.