What Does Hijab Really Mean?

We also need to consider all authentic references from ahadith of the Prophet (ﷺ). As Allah (SWT) says in the Qur’an:

“And whatever the Messenger (ﷺ) gives you, take it; And whatever he forbids you, leave it. And fear Allah, truly Allah is severe in punishment.”
[al Hashr 59:7]

Further, we must consider the understanding of the sahaba (companions of the Prophet ﷺ) of the verses of the Qur’an. Allah (SWT) says:

“And the foremost to embrace Islam of the Muhajirun and the Ansar (i.e. the companions) and also those who followed them exactly (in Faith). Allah is well-pleased with them as they are well-pleased with Him. He has prepared for them Gardens under which rivers flow (Paradise), to dwell therein forever. That is the supreme success.” [At-Taubah 9:100]

In addition, a true student of knowledge examines the opinion of the earliest muffasirs (exegesists) of the Qur’an and the view of the jamaah (consensus amongst the earliest scholars). This is based upon what Allah (SWT) revealed:

“O you who believe! Obey Allah and obey the Messenger (ﷺ), and those of you (Muslims) who are in authority. (And) if you differ in anything amongst yourselves, refer it to Allah and His Messenger (ﷺ), if you believe in Allah and in the Last Day. That is better and more suitable for final determination.” [an Nisa 4:59]

Surah Al-Ahzaab, Verse #59
‘O Prophet! Tell your wives and your daughters and the women of the believers to draw their cloaks (“Jalabib”) veils all over their bodies (screen themselves completely) that is most convenient that they should be known (as such) and not molested: and Allah is Oft-Forgiving Most Merciful.”

Surah An-Nur, Verses #30 and #31
‘And Say to the believing women to lower their gaze (from looking at forbidden things), and protect their private parts (from illegal sexual acts) and not to show off their adornment except only that which is apparent (like the eyes or hands for necessity), and to draw their veils all over Juyubihinna (i.e. their bodies, faces, necks and bosoms)

Sahih Al-Bukhari Volume 6, Book 60, Hadith # 282
Narrated Safiya bint Shaiba (Radhiallaahu Anha) “Aisha (Radhiallaahu Anha) used to say: “When (the Verse): “They should draw their veils over their necks and bosoms,” was revealed, (the ladies) cut their waist sheets at the edges and covered their faces with the cut pieces.

Sahih Al-Bukhari Volume 1, Book 8, Hadith # 368
Narrated ‘Aisha (Radhiallaahu Anha) Rasulullah (ﷺ) used to offer the Fajr prayer and some believing women covered with their veiling sheets used to attend the Fajr prayer with him and then they would return to their homes unrecognized.

Shaikh Ibn Uthaimin in tafseer of this hadith explains “This hadith makes it clear that the Islamic dress is concealing of the entire body as explained in this hadith. Only with the complete cover including the face and hands can a woman not be recognized. This was the understanding and practice of the Sahaba and they were the best of group, the noblest in the sight of Allah (swt) with the most complete Imaan and noblest of characters. so if the practice of the women of the sahaba was to wear the complete veil then how can we deviate from their path? (Ibn Uthaimin in the book “Hijaab” page # 12 and 13)

Sahih Al-Bukhari Volume 1, Book 4, Hadith # 148
Narrated ‘Aisha (Radhiallaahu Anha): The wives of Rasulullah (ﷺ) used to go to Al-Manasi, a vast open place (near Baqia at Medina) to answer the call of nature at night. ‘Umar used to say to the Prophet “Let your wives be veiled,” but Rasulullah (ﷺ) did not do so. One night Sauda bint Zam’a the wife of the Prophet went out at ‘Isha’ time and she was a tall lady. ‘Umar addressed her and said, “I have recognized you, O Sauda.” He said so, as he desired eagerly that the verses of Al-Hijab (the observing of veils by the Muslim women) may be revealed. So Allah revealed the verses of “Al-Hijab” (A complete body cover excluding the eyes).

Abu Dawood Book 14, Hadith # 2482
Narrated Thabit ibn Qays (Radhiallaahu Anhu): A woman called Umm Khallad came to the Prophet (ﷺ) while she was veiled. She was searching for her son who had been killed (in the battle) Some of the Companions of the Prophet (ﷺ) said to her: You have come here asking for your son while veiling your face? She said: If I am afflicted with the loss of my son, I shall not suffer the loss of my modesty. Rasulullah (ﷺ) said: You will get the reward of two martyrs for your son. She asked: Why is that so, oh Prophet of Allah? He replied: Because the people of the Book have killed him.

Abu Dawood Book 32, Hadith # 4090
Narrated Umm Salamah, Ummul Mu’minin (Radhiallaahu Anha): When the verse “That they should cast their outer garments over their persons” was revealed, the women of Ansar came out as if they had crows over their heads by wearing outer garments.

Abu Dawood Book 32, Hadith # 4091
Narrated Aisha, Ummul Mu’minin (Radhiallaahu Anha) “May Allah have mercy on the early immigrant women. When the verse “That they should draw their veils over their bosoms” was revealed, they tore their thick outer garments and made veils from them. Ibn Hajar Al-Asqalanee, who is known as Ameer Al-Mu’mineen in the field of Hadith, said that the phrase, “covered themselves”, in the above Hadith means that they “covered their faces”. [Fath Al-Bari]. 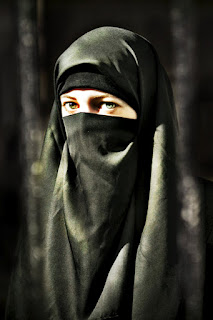 Imaam Malik’s Muwatta Book 20 Hadith # 20.5.16
Yahya related to me from Malik from Hisham ibn Urwa that Fatima bint al-Mundhir (Radhiallaahu Anha) said, “We used to veil our faces when we were in Ihram in the company of Asma bint Abi Bakr As-Siddiq (Radhiallaahu Anha). “This again proves that not only the wives of Rasulullah (ﷺ) wore the Niqab and that even though in Ihram women are not supposed to wear Niqab but if men are there they still have to cover the face.

Abu Dawood Book 10, Hadith # 1829
Narrated Aisha, Ummul Mu’minin: (Radhiallaahu Anha) who said, “The riders would pass us while we were with the Messenger of Allah (ﷺ). When they got close to us, we would draw our outer cloak from our heads over our faces. When they passed by, we would uncover our faces.

Recorded by Ahmad, Abu Dawood and Ibn Majah, Narrated ‘Aisha. [In his work Jilbab al-Marah al-Muslimah, al-Albani states (p. 108) that it is hasan due to corroborating evidence. Also, in a narration from Asma {who was not the wife of Rasulullah (ﷺ)}, Asma also covered her face at all times in front of men.] Shaikh Ibn Uthaimin in his tafseer of this hadith explains “This hadith indicates the compulsion of the concealing of the faces as an order of Shariah, because during the Ihram it is “wajib” (compulsory) NOT to wear the Niqab. So if it was only mustahab (recommended) to cover the face then Aisha and Asma (Radhiallaahu Anha) would have taken the wajib over the mustahab. It is well known by the Ullema that a wajib can only be left because of something that is also wajib or fardh. So Aisha and Asma (Radhiallaahu Anha) covering the face even in Ihram in the presence of strange (ghairMahraam) men shows that they understood this to be an act that was wajib or fardh or they would not have covered the face in Ihraam.

Sahih Al-Bukhari Volume 1, Book 8, Hadith # 347
Narrated Um ‘Atiya (Radhiallaahu Anha) We were ordered (by Rasulullah (ﷺ) to bring out our menstruating women and veiled women in the religious gatherings and invocation of Muslims on the two ‘Eid festivals. These menstruating women were to keep away from their Musalla. A woman asked, “O Allah’s Apostle ‘ What about one who does not have a veil (the veil is the complete cover with only one eye or two eyes showing)?” He said, “Let her share the veil of her companion.” Shaikh Ibn Uthaimin in tafseer of this hadith explained “This hadith proves that the general norm amongst the women of the Sahaba (Radhiallaahu Anhuma) was that no woman would go out of her home without a cloak, fully concealed and if she did not possess a veil, then it was not possible for her to go out. It was for this reason that when Rasulullah (ﷺ) ordered them to go to the Place for Eid Salah, they mentioned this hindrance. As a result Rasulullah (ﷺ) said that someone should lend her a veil, but did not say they could go out without it. If Rasulullah (ﷺ) did not allow women to go to a place like the Eid Salah, which has been ordered by Shariah for women and men alike, then how can people let women to out to market places and shopping centers without where there is open intermingling of the sexes, without a veil. (by Shaikh Ibn Uthaimin in the book “Hijaab” page # 11)

Sahih Al-Bukhari Volume 8, Book 76, Hadith # 572
In the end of this very long hadith it quotes Anas (Radhiallaahu Anho) rates from Rasulullah (ﷺ) “and if one of the women of Paradise looked at the earth, she would fill the whole space between them (the earth and the heaven) with light, and would fill whatever is in between them, with perfume, and the veil of her face is better than the whole world and whatever is in it.” This show that even the women of Junnah have veils and the word veil is what covers the face (niqab).

Note: Quoted in the famous book Mishkaat. Here the Mufasereen of hadith have explained that the hadith where women came up to Rasulullah (ﷺ) face to face were before the ayah “And when you ask (his wives) for anything you want, ask them from behind a screen, that is purer for your hearts and for their hearts.” (Surah Al Ahzâb ayah # 53) And this hadith proves this order is for the whole Ummah not just for the wives of Rasulullah (ﷺ)!

Abu Dawood Book 2, Hadith # 0641
Narrated Aisha, Ummul Mu’minin (Radhiallaahu Anha) “Rasulullah (ﷺ) said “Allah does not accept the prayer of a woman who has reached puberty unless she wears a veil.”

Sahih Al-Bukhari Volume 7, Book 65, Hadith # 375
Narrated Anas (Radhiallaahu Anhu) I know (about) the Hijab (the order of veiling of women) more than anybody else. Ubai bin Ka’b used to ask me about it. Allah’s Apostle became the bridegroom of Zainab bint Jahsh whom he married at Medina. After the sun had risen high in the sky, the Prophet invited the people to a meal. Rasulullah (ﷺ) remained sitting and some people remained sitting with him after the other guests had left. Then Rasulullah (ﷺ) got up and went away, and I too, followed him till he reached the door of ‘Aisha’s room. Then he thought that the people must have left the place by then, so he returned and I also returned with him. Behold, the people were still sitting at their places. So he went back again for the second time, and I went along with him too. When we reached the door of ‘Aisha’s room, he returned and I also returned with him to see that the people had left. Thereupon Rasulullah (ﷺ) hung a curtain between me and him and the Verse regarding the order for (veiling of women) Hijab was revealed.