Are Women Inferior To Men In Islam? | What Islam Says About The Rights of Women 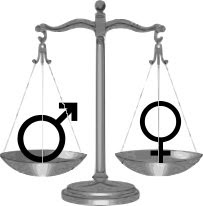 ‎’Women are inferior to men’ is one of the most common misconception about Islam. The article below seeks to remove the misconception INSHALLAH

“O mankind! We created you from a single (pair) of a male and a female, and made you into nations and tribes, that ye may know each other (not that ye may despise each other) **Verily the most honored of you in the sight of God is (he who is) the most righteous of you**…” [Surah 49:13]

Islam believes in equality between men and women – Equality does not mean identicallity.

Out of the hundreds of students, 2 come out first ‘A’ and ‘B’

– Student ‘B’ was higher than student ‘A’ in question number 2.

So in short, student ‘A’ and student ‘B’ are over all equal

No, but natural you’ll fight him – If required they may interfere – under normal circumstances since Allah has given you more physical strength, you have to go and tackle the thief.

So here, in physical strength, man is one degree higher than the woman

“..And they (women) have rights (over their husbands as regards living expenses, etc.) similar (to those of their husbands) over them (as regards obedience and respect, etc.) to what is reasonable, but men have a degree (of responsibility) over them..” [2:228]

a) The things which men can do and women cannot

* Point no: 1 (Men are protectors of women as a whole)

“Men are the protectors and maintainers of women, because Allaah has made one of them to excel the other, and because they spend (to support them) from their means”[al-Nisa’ 4:34]

A woman’s ‘awrah includes her entire body. The least that can be said is that she should not uncover anything except her face and hands

“O Prophet! Tell your wives and your daughters and the women of the believers to draw their cloaks (veils) all over their bodies. That will be better, that they should be knownso as not to be annoyed. And Allaah is Ever Oft‑Forgiving, Most Merciful”[al-Ahzaab 33:59]

Prayer in the mosque is obligatory for men, but not for women; a woman’s prayer is in her house but she can pray in Masjid as well.

Jihad (Jihad bil Saif/fighting)is not obligatory for women, but they can help if men are in need.

b) Things which women can do and men can not

a) Abu Dawood (3535) narrated that ‘Ali ibn Abi Taalib (may Allaah be pleased with him) said: “The Prophet (peace and blessings of Allaah be upon him) took a piece of silk in his right hand and a piece of gold in his left and said, ‘These two are forbidden for the males of my ummah.’” Classed as saheeh by al-Albaani in Saheeh Abi Dawood, 3422.

b) “These are haraam for the males of my ummah and permitted for the females.” (Reported by Ibn Maajah, 2/1189).

Man gives the dower to his wife even if it is mountain of Gold.

Proof: Surah 4:4 (And give the women (on marriage) their dower as a free gift)

* Point no: 4 (Monthly periods of women)

Women are commanded in their monthly periods to leave prayers.

* .Point no: 6(Martyr when a woman die during child birth)

If a woman dies with a child in her womb, or she dies during childbirth or after childbirth but within the period of nifaas (post-partum bleeding), she is considered to be a shaheedah in sha Allaah. according to hadith of Maalik (1/233) and Abu Dawood, 3/482)]

Males and Females are equal as per rewards are concern. (unfortunately few muslims think that in matters of deed men have the authority)

[004:124] And whoever does righteous good deeds, male or female, and is a true believer in the Oneness of Allah (Muslim), such will enter Paradise and not the least injustice, even to the size of a Naqeera (speck on the back of a datestone), will be done to them.

[016:097] Whoever works righteousness, man or woman, and has Faith, verily, to him will We give a new Life, a life that is good and pure and We will bestow on such their reward according to the best of their actions.

[040:040] “He that works evil will not be requited but by the like thereof: and he that works a righteous deed – whether man or woman – and is a Believer- such will enter the Garden (of Bliss): Therein will they have abundance without measure.