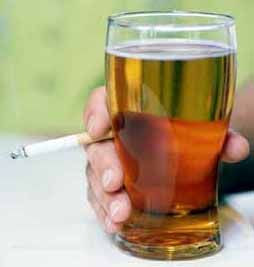 “They ask you (O Muhammad ) concerning alcoholic drink and gambling. Say: “In them is a great sin, and (some) benefit for men, but the sin of them is greater than their benefit.” And they ask you what they ought to spend. Say: “That which is beyond your needs.” Thus Allâh makes clear to you His Laws in order that you may give thought.”

Shaitan’s Use of Intoxicants:

Shaitân (Satan) wants only to excite enmity and hatred between you with intoxicants (alcoholic drinks) and gambling, and hinder you from the remembrance of Allâh and from As-Salât (the prayer). So, will you not then abstain?

“Don’t drink wine for it is the key to every evil. “

Narrated byAbi Burda That Abu Musa Al-Ash’ari said that the Prophet had sent him to Yemen and he asked the Prophet about certain (alcoholic) drink which used to be prepared there. The Prophet said, “What are they?” Abu Musa said, “Al-Bit’ and Al-Mizr?” He said, “Al-Bit is an alcoholic drink made from honey; and Al-Mizr is an alcoholic drink made from barley.” The Prophet said, “All intoxicants are prohibited.”
Sahih Al-Bukhari Hadith (5.631)

Narrated byAisha When the last verses of Surat-al-Baqara were revealed, the Prophet went out (of his house to the Mosque) and said, “The trade of alcohol has become illegal.”
Sahih Al-Bukhari Hadith (3.429)

Narrated ‘Uqba bin Al-Harith: An-Nu’man or the son of An-Nu’man was brought to the Prophet on a charge of drunkenness. So the Prophet ordered all the men present in the house, to beat him. So all of them beat him, and I was also one of them who beat him with shoes.
Sahih Bukhari.