The 99 Names Of Allah With Meanings 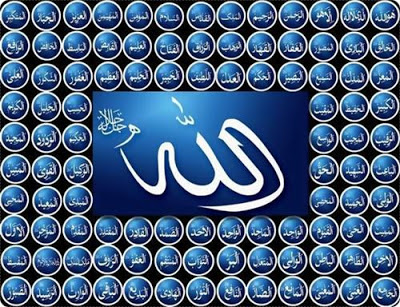 The 99 Names Of Allah With Meanings

2. Ar-Rahim
• The One who has plenty of mercy for the believers.
• The most Compassionate

3. Al-Malik
• The One with the complete Dominion, the One Whose Dominion is clear from imperfection.
• The King, the Monarch

4. Al-Quddus
• The One who is pure from any imperfection and clear from children and adversaries.
• The Holy one

5. As-Salam
• The One who is free from every imperfection.
• The Peace, The Tranquility

7. Al-Muhaymin
• The One who witnesses the saying and deeds of His creatures.
• The Protector
• The vigilant, the controller

8. Al-‘Aziz
• The Defeater who is not defeated.
• The Mighty
• The Almighty, the powerful

9. Al-Jabbar
• The One that nothing happens in His Dominion except that which He willed.
• The all Compelling

10. Al-Mutakabbir
• The One who is clear from the attributes of the creatures and from resembling them.
• The Haughty, the Majestic
• The Imperious

11. Al-Khaliq
• The One who brings everything from non-existence to existence.
• The Creator, the Maker

12. Al-Bari’
• The Creator who has the Power to turn the entities.
• The Artificer, the Creator

13. Al-Musawwir
• The One who forms His creatures in different pictures.
• The Fashioner
• The Organizer, the Designer

14. Al-Ghaffar
• The One who forgives the sins of His slaves time and time again.
• The Forgiving, the Forgiver

15. Al-Qahhar
• The Subduer who has the perfect Power and is not unable over anything.
• The Almighty, the Dominant

16. Al-Wahhab
• The One who is Generous in giving plenty without any return.
• The Donor, the Bestower

17. Ar-Razzaq
• The Provider, the Sustainer

18. Al-Fattah
• The One who opens for His slaves the closed worldly and religious matters.
• The Opener, the Revealer

19. Al-‘Alim
• The Knowledgeable; The One nothing is absent from His knowledge.
• The all Knowing, the Omniscient

20. Al-Qabid
• The One who constricts the sustenance.
• The Contractor, The Restrainer, the Recipient.

22. Al-Khafid
• The One who lowers whoever He willed by His Destruction.
• The Abaser, the Humbler

23. Ar-Rafi’
• The One who raises whoever He willed by His Endowment.
• The Raiser, the Exalter

24. Al-Mu’iz
• He gives esteem to whoever He willed, hence there is no one to degrade Him;
• The Honorer, the Exalter

25. Al-Muzil
• Degrades whoever he willed, hence there is no one to give him esteem.
• The Abaser, the Degrader, the Subduer

26. As-Sami’
• The One who Hears all things that are heard by His Eternal Hearing without an ear, instrument or organ.
• The Hearer, The All hearing, all knowing.

27. Al-Basir
• The One who Sees all things that are seen by His Eternal Seeing without a pupil or any other instrument.
• The Seer, The discerning, the All seeing.

28. Al-Hakam
• He is the Ruler and His judgment is His Word.
• The arbitrator, the Judge

31. Al-Khabir
• The One who knows the truth of things.
• The Aware. The Sagacious, one is who is aware.

32. Al-Halim
• The One who delays the punishment for those who deserve it and then He might forgive them.
• The Gentle. The most patient, the Clement.

33. Al-‘Azim
• The One deserving the attributes of Exaltment, Glory, Extolment, and Purity from all imperfection.
• The Great, Mighty

34. Al-Ghafoor
• The One who forgives a lot.
• The Forgiving, the Pardoner.

35. Ash-Shakur
• The One who gives a lot of reward for a little obedience.
• The Grateful, the Thankful

36. Al-‘Ali
• The One who is clear from the attributes of the creatures.
• The most high, the exalted.

37. Al-Kabir
• The One who is greater than everything in status.
• The great, the big.

38. Al-Hafiz
• The One who protects whatever and whoever He willed to protect.
• The Guardian, the preserver.

39. Al-Muqit
• The One who has the Power.
• The maintainer, The Nourisher

40. Al-Hasib
• The One who gives the satisfaction.
• The noble, The Reckoner

41. Aj-Jalil
• The One who is attributed with greatness of Power and Glory of status.
• The Majestic. The honorable, the exalted.

42. Al-Karim
• The One who is clear from abjectness.
• The most generous, the Bountiful.

43. Ar-Raqib
• The One that nothing is absent from Him. Hence it’s meaning is related to the attribute of Knowledge.
• The Guardian, the watchful. Watcher.

44. Al-Mujib
• The One who answers the one in need if he asks Him and rescues the yearner if he calls upon Him.
• The Responder. The respondent, one who answers.

46. Al-Hakim
• The One who is correct in His doings.
• The most Wise, the Judicious.

47. Al-Wadud
• The Affectionate, the Loving.

48. Al-Majid
• The One who is with perfect Power, High Status, Compassion, Generosity and Kindness.
• The Glorious, the exalted.

49. Al-Ba’ith
• The One who resurrects for reward and/or punishment.
• The Resurrector, the Raiser from death.

50. Ash-Shahid
• The One who nothing is absent from Him.
• The Witness

52. Al-Wakil
• The One who gives the satisfaction and is relied upon.
• The Guardian, the Trustee

53. Al-Qawee
• The One with the complete Power.
• The powerful, the Almighty, The Strong

54. Al-Matin
• The One with extreme Power which is un-interrupted and He does not get tired.
• The Strong, the Firm

55. Al-Walee
• The Supporter, the Friend, the Defender the master.

56. Al-Hamid
• The praised One who deserves to be praised.
• The Praiseworthy , the Commendable

57. Al-Muhsi
• The One who the count of things are known to him.
• The Counter

58. Al-Mubdi’
• The One who started the human being. That is, He created him.
• The Beginner, the Creator, The Originator

59. Al-Mu’eed
• The One who brings back the creatures after death.
• The Restorer, the Resurrector.

60. Al-Muhyee
• The One who took out a living human from semen that does not have a soul. He gives life by giving the souls back to the worn out bodies on the resurrection day and He makes the hearts alive by the light of knowledge.
• The Bestower, the Life Giver.

61. Al-Mumeet
• The One who renders the living dead.
• The Bringer of Death. The Death Giver.

62. Al-Hayy
• The One attributed with a life that is unlike our life and is not that of a combination of soul, flesh or blood.
• The Living. The Alive, the ever living.

63. Al-Qayyum
• The One who remains and does not end.
• The Self-Subsistent, The Eternal, the Self Sustaining.

64. Al-Wajid
• The Rich who is never poor. Al-Wajd is Richness.
• The all perceiving, the Opulent, the Finder.

68. As-Samad
• The Master who is relied upon in matters and reverted to in ones needs.
• The Perfect, the Eternal.

69. Al-Qadir
• The One attributed with Power.
• The Able, the Capable, the Omnipotent.

70. Al-Muqtadir
• The One with the perfect Power that nothing is withheld from Him.
• The Capable, The all Powerful

71. Al-Muqaddim
• He makes ahead what He wills.
• The Presenter, The Advancer, The Expediter

72. Al-Mu’akhkhir
• The One who delays what He wills.
• The Fulfiller, the keeper behind, The Deferrer

73. Al-‘Awwal
• The One whose Existence is without a beginning.
• The First

75. Az-Zahir
• The Apparent, the Exterior, The Manifest
• The One that nothing is above Him and nothing is underneath Him, hence He exists without a place.

76. Al-Batin
• The Hidden, the Interior, the Latent

77. Al-Wali
• The One who owns things and manages them.
• The Governor, The Ruler, The Master

78. Al-Muta’ali
• The One who is clear from the attributes of the creation.
• The Exalted, The most high, one above reproach.

79. Al-Barr
• The One who is kind to His creatures, who covered them with His sustenance and specified whoever He willed among them by His support, protection, and special mercy.
• The Benefactor, The Beneficent, the Pious.

80. At-Tawwab
• The One who grants repentance to whoever He willed among His creatures and accepts his repentance.
• The Acceptor of Repentance, The Forgiver, the Relenting.

81. Al-Muntaqim
• The One who victoriously prevails over His enemies and punishes them for their sins. It may mean the One who destroys them.
• The Avenger

82. Al-‘Afuww
• The One with wide forgiveness.
• The Forgiver, the effacer, the Pardoner

83. Ar-Ra’uf
• The One with extreme Mercy. The Mercy of Allah is His will to endow upon whoever He willed among His creatures.
• The merciful, the Ever Indulgent.

84. Malik Al-Mulk
• The One who controls the Dominion and gives dominion to whoever He willed.
• The Ruler of the Kingdom, king of the Universe

85. Zul-l-Jalal wal-Ikram
• The One who deserves to be Exalted and not denied.
• Lord of Majesty and Generosity

86. Al-Muqsit
• The One who is Just in His judgment.
• The Just, the Equitable

87. Aj-Jami’
• The One who gathers the creatures on a day that there is no doubt about, that is the Day of Judgment.
• The Collector, the comprehensive, Gatherer

88. Al-Ghanee
• The One who does not need the creation.
• The rich, the all sufficing, Self-Sufficient

89. Al-Mughnee
• The One who satisfies the necessities of the creatures.
• The Enricher, sufficer, the bestower.

90. Al-Mani’
• The Supporter who protects and gives victory to His pious believers. Al-Mu’tiy
• The Withholder
• The Preventer, the prohibiter, the defender.

91. Ad-Darr
• The One who makes harm reach to whoever He willed.
• The Distresser , The afflictor, the bringer of Adversity.

92. An-Nafi’
• The One who gives benefits to whoever He wills.
• The Beneficial Benefactor

94. Al-Hadi
• The One whom with His Guidance His believers were guided, and with His Guidance the living beings have been guided to what is beneficial or them and protected from what is harmful to them.
• The Guide

95. Al-Badi’
• The One who created the creation and formed it without any preceding example.
• The Wonderful, the maker, Incomparable

96. Al-Baqi
• The One that the state of non-existence is impossible for Him.
• The Enduring, the Everlasting, the eternal

97. Al-Warith
• The One whose Existence remains.
• The Inheritor, The Heir

98. Ar-Rashid
• The One who guides.
• The Rightly Guided, The Conscious, the Guide

99. As-Sabur
• The One who does not quickly punish the sinners.
• The most Patient, the Enduring.