Signs of the Appearance of Dajjal and HAARP Technology 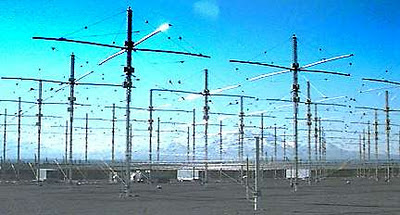 This video is based on some of my own research and analysis of the Hadith (sayings of the Prphet Muhammad s.a.w.s) concerning The Dajjal – Antichrist.
I based this video on the hadith Narrated by An-Nawwas ibn Sam’an who said: Allah’s Apostle (s.a.w.s)) mentioned of the Dajjal one day in the morning..
When the Prophet was Describing Dajjal, He said:

“He will then give a command to the sky: there will be rainfall upon the Earth”

When i read this Hadith i was shocked & taken back a lil, because i remember reading this article on internet about the modern day warfare & what the Science & Technology can do now days. Earthquake induction and environmental modification are part of the latest developments in waging war. The possibility now exists to conduct secret wars as you will see in my vid.

According to Dr. Bertell book, electromagnetic weapons have the ability to transmit explosive and other effects such as earthquake induction across intercontinental distances to any selected target site on the globe with force levels equivalent to major nuclear explosions.

For the past 40 years, the US military has conducted experiments on the earths atmosphere using waves and chemicals.

Attempts to gain control of the weather, through environmental engineering with experiments involving laser and chemicals to ascertain whether they could damage the ozone layer over an enemy; cause damage to crops and human health through exposure to the suns ultraviolet rays, have been carried out by the military..

When we look at what was written in Dr. Bertell book above & we match that with the Hadith , we can see it goes hand in hand with the description of The Dajjal,
The Prophet Muhammad(sallallahu alaiyhi wassallam) Clearly Stated:

“He will then give a command to the sky: there will be rainfall upon the Earth and it will grow crops”

I guess whoever is behind planning those secret wars & giving orders for the use of such force of nature against the humanity is the one that was described by our Holy Prophet (Sallahu ‘Alaihi Wasallam) as The Dajjal..

Please Don’t take this video as actual fact, take it as an analysis of the Hadith

(Only Allah Knows The Truth)