Islam is Very Easy Religion if We Follow – Beautiful Woman, Who Wanted to get Married 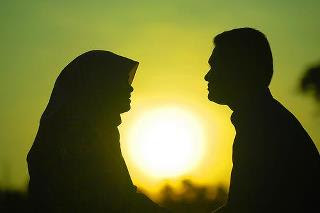 There was a beautiful woman, who wanted to get married, but she wanted a very pious husband, so she said that she’ll marry the man who recites the whole Quran every single day, fasts for the whole year and stays awake and worships Allah all throughout the night.

She was a very beautiful woman, and a lot of suitors wanted to marry her, but they knew they couldn’t fulfil the conditions she set. Until this one man stepped forward and said he could fulfil them. So the Imam got both of them married.

After the first night of the marriage, the wife sees that the husband doesn’t recite the whole of the Quran, nor does he fast, nor does he stay awake in the worship of Allah, she decided to let it roll on for a few weeks to see if there were any changes, there weren’t, so she filed a complaint and asked for a divorce.

They are both taken in front of the judge, and the judge asked, ‘What were the conditions of the marriage?’ the man replied ‘They were for me to recite the whole Quran daily, keep fast for the whole year and to worship Allah all throughout the night.’

The Judge asked, ‘ did you fulfil them? The man calmly answered, ‘…yes.’

The judge answers, ‘you lie, your wife has said that you don’t, that’s why she’s asking for a divorce’.

But the man insisted that he had fulfilled the conditions, so the judge asked, ‘did you recite the full Quran everyday?’ The man answered yes. The Judge, baffled asked, ‘how? How can you do that?’

The Judge was intrigued, so he asked, ‘how did you fast the whole year?’

The Judge remained silent, he couldn’t give a reply saying the man was wrong, so finally he asked, ‘ how did you stay awake all night and worship Allah, when your wife saw you sleeping?’ The Judge thought the man wouldn’t be able to answer this one,

The Judge sat there looking at the man; the final verdict was about to be released…

He said to the man and his wife, ‘…go, just go, there is nothing wrong with this marriage’…

Moral ♥ : ISLAM IS A VERY EASY RELIGION IF WE FOLLOW IT

LEARN FROM THE STORY : IF WE FOLLOW THE ISLAM WITH TRUE SPIRIT “WE CAN BECOME A PERFACT MUSLIMS

2 thoughts on “Islam is Very Easy Religion if We Follow – Beautiful Woman, Who Wanted to get Married”