How Should We Observe Laylat al-Qadr And When Is It?

How Should We Observe Laylat al-Qadr And When Is It?

We are now in to last ten days of blessed month. And these last ten days and nights are the most virtus and blessed. In it comes the Laylatul Qadr.

One of the best du’aa’s that may be recited on Laylat al-Qadr is that which the Prophet (peace and blessings of Allah be upon him) taught to ‘Aa’ishah (may Allah be pleased with her). Al-Tirmidhi narrated, and classed the report as saheeh, that ‘Aa’ishah said: “I said, ‘O Messenger of Allah, if I know which night is Laylat al-Qadr, what should I say on that night?’ He said, ‘Say: Allaahumma innaka ‘afuwwun tuhibb al-‘afwa fa’affu ‘anni (O Allah, You are forgiving and You love forgiveness, so forgive me).”

With regard to specifying which night of Ramadan is Laylat al-Qadr, this needs specific evidence, but the odd-numbered nights during the last ten nights are more likely than others, and the night of the twenty-seventh is the most likely to be Laylat al-Qadr, because that is mentioned in the hadeeth.

With regard to innovations, they are not permissible during Ramadan or at other times. It was proven that the Messenger of Allaah (peace and blessings of Allaah be upon him) said: “Whoever innovates anything in this matter of ours that is not part of it will have it rejected.” According to another report, “Whoever does any action that is not part of this matter of ours will have it rejected.”

We know of no basis for the celebrations that are held during some nights of Ramadan. The best of guidance is the guidance of Muhammad (peace and blessings of Allaah be upon him) and the worst of matters are those which are innovated (bid’ah).

And Allah is the Source of strength. May Allah send blessings and peace upon our Prophet Muhammad and his family and companions. 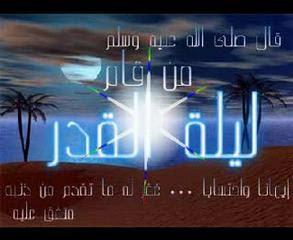 One thought on “How Should We Observe Laylat al-Qadr And When Is It?”