The first ten days of Dhul-Hijjah are the most virtuous days of the year, in which Allah (swt) has blessed his Ummah with opportunities to multiply their rewards through His infinite mercy. These days are so sacred that Allah swears an oath by them: ‘By the dawn; by the ten nights’
[The Noble Qur’an, 89:1-2].

And Allah also reminds us: ‘Remember Allah during the appointed days’. [The Noble Qur’an, 2:203]

Therefore, we should increase our acts of worship during this sacred time. The Prophet (saw) said, ‘There are no days in which righteous deeds are more beloved to Allah than in these (ten) days’. [Abu Dawud]

Here are nine Sunnah actions you should follow to seek Allah’s forgiveness and maximise your reward during the best ten days of the year:

Let’s begin with a simple yet effective action – increasing your dhikr. In Makkah, the Talbiyah will be on every pilgrim’s tongue throughout the day and night; those at home have also been commanded to praise Allah constantly in these ten days.

The Eid takbeer is an example of dhikr that ticks all three of these boxes – tahleel, takbeer and tahmeed.

Reciting SubhanAllahi wa bihamdihi (Glory be to Allah and praise Him) one hundred times a day will wipe away sins – no matter how burdensome they are.

These simple measures will ensure you are remembering Allah throughout the day and benefitting from the blessings of Dhul-Hijjah.

It is Sunnah to fast on the first nine days of Dhul-Hijjah, because fasting is one of the best of deeds. In a hadith Qudsi, Allah says, ‘All the deeds of the son of Adam are for him, except fasting, which is for Me and I shall reward for it’. [Bukhari]

If you are unable to fast for the whole nine days, try to fast on just the Day of ’Arafah, the 9th of Dhul-Hijjah. Just as Laylat al-Qadr is the most blessed night of the year, ’Arafah is the most blessed day of the year. The Prophet (saw) said, ’There is no day on which Allah frees more people from the Fire than on the day of ‘Arafah’. (Muslim)

Like Laylat al-Qadr, we should spend this day seeking forgiveness and availing ourselves of Allah’s incredible mercy. On this day, non-pilgrims have the opportunity to extinguish the sins of two years by fasting! The Prophet (saw) said, ′It (fasting on the Day of ‘Arafah) expiates the sins of the past year and the coming year’. [Muslim]

SubhanAllah, imagine the rewards you will earn from reading each letter during these blessed days when Allah has promised to multiply your reward!

Many of us will try to perform a Hajj specifically for a loved one that has passed away or make du’a for loved ones during our own Hajj so that Allah will forgive them and have mercy on them on the Day of Judgement.

If you are unable to perform a Hajj for a loved one you can still honour them by giving Sadaqah Jariyah in their name on these blessed days. Prophet Muhammad (saw) said, ‘When a person dies, his deeds come to an end except for three: Sadaqah Jariyah, knowledge from which benefit is gained, or a righteous child who prays for him’. [Muslim]

Our beloved Prophet (saw) told us that giving water is the best form of Sadaqah. By building a well in the name of your loved one you will be gifting a source of life to a whole community and increasing your loved one’s record of good deeds for the Day of Judgement. 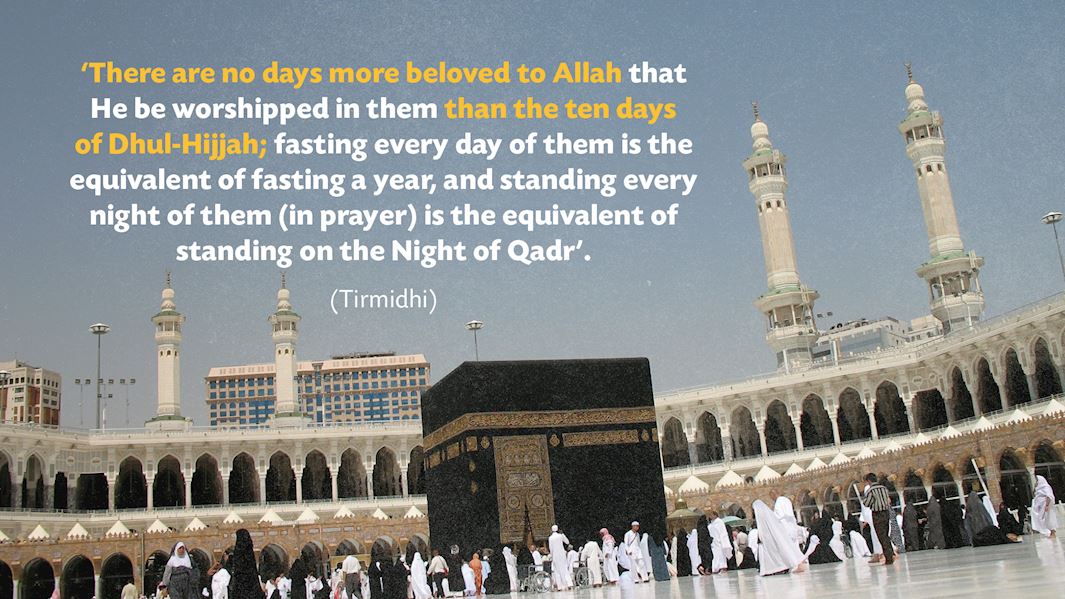 Many of us maximise our Sadaqah during the last ten nights of Ramadan, but the first ten days of Dhul-Hijjah are just as valuable and present the perfect opportunity to earn extra rewards for simple good deeds!

Hasan al-Basri (rh) said, ‘Going to fulfil the need of your brother is better for you than performing Hajj after Hajj’.

Hajj is the ultimate act of worship we can perform as Muslims to seek forgiveness from Allah and expiate our sins, but most of us are lucky if we can go even once in our lifetime. That is why Dhul-Hijjah is the perfect gift from Allah, allowing us to repent and seek forgiveness for our sins even if we are not on pilgrimage.

Repentance brings us closer to Allah and cleanses our souls. Allah says:

‘Seek forgiveness of your Lord and repent to Him, [and] He will let you enjoy a good provision for a specified term and give every doer of favour his favour’. [The Noble Qur’an, 11:3]

Pray Eid Salah
Eid Salah is one of the ways we show our Islamic identity as a community and is therefore a very important act of worship for all Muslims to partake in. The Prophet (saw) always attended Eid Salah, as did his companions after he had passed away. He encouraged everyone to attend, even menstruating women – who are unable to perform the prayer itself but can still share in the blessings of this gathering.

8,Give A Prophetic Qurbani

Abu Talhah (ra) reported, ‘The Prophet (saw) sacrificed for the one who could not sacrifice from his Ummah, one who bore witness to the Oneness of Allah and [his] Prophethood’. [Tabarani and Ahmad]

During Eid, the Prophet (saw) would offer an additional sacrifice on behalf of someone in his Ummah that could not afford to. Allah says, ‘There has come to you a Messenger of Allah from among yourselves, who is distressed by the losses you sustain, who is ardently desirous of your welfare and is tender and merciful to those that believe’. [The Noble Qur’an, 9:128]

SubhanAllah, this generous act of our beloved Messenger of Allah is an incredible example of His mercy to His Ummah that Allah refers to in the above ayah, to sacrifice for his Ummah and cover them till the Day of Judgement.